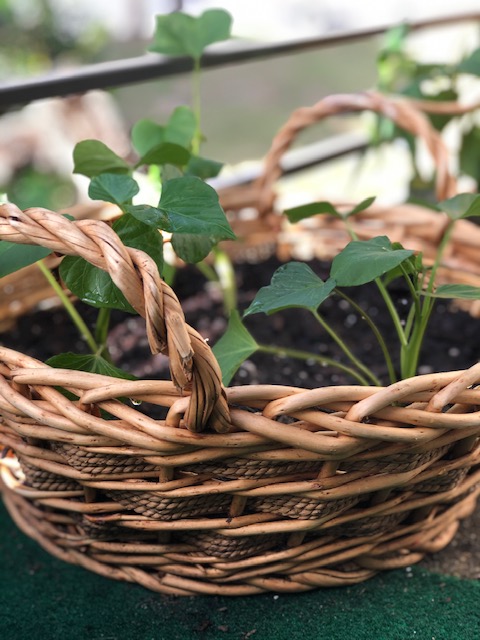 There’s a familiar expression among the religious community, which says: “As it is in the natural, it is in the spirit.”

In laymen’s terms, what that means is our natural experiences often times mirror what’s happening in the spiritual realm.

Nowhere is that more apparent than in gardening. That’s one of the greatest joys I’ve found from tending to a garden. If you’re paying attention, there are so many lessons it can teach you about life.

In general, one of the most obvious lessons it teaches you is to have patience. Once you put seed in the ground, it takes time for you to see a harvest.

Just this past week, I learned a critical lesson that blessed me so much.

A few weeks ago, I planted several sweet potato plants. I’ve never grown sweet potatoes before and since I have a balcony garden I was skeptical that it could grow in that environment. I assumed they had to grow in the ground.

But the teachers I work with at one of my school garden projects told me that sweet potatoes are very easy to grow. They actually give their first and second grade students sweet potatoes and small pots at the end of the school year to continue their gardening projects at home over the summer.

Furthermore, they even told of how you can take an actual sweet potato, cut it up into pieces, plant them in soil, and they will reproduce.

So, with all of that information, I decided to give it a try.

I bought several plants and potted them in two different containers, one in a traditional planter and one in a small wicker basket. The plant began to grow really quickly.

Within weeks the vines were spreading all over the balcony and some of the leaves began to turn almost a reddish brown.

My first thought was this container isn’t big enough and they don’t have the room to harvest properly. I didn’t know how the sweet potatoes would actually appear. I didn’t think they would grow from the leaves, but I wasn’t sure how they would produce.

As more leaves began to turn brown, I thought this little experiment wasn’t working out. So, initially I decided I would just scrap the project because it was clear sweet potatoes aren’t meant to be grown in pots on the balcony.

Then a good friend gave me a crash course in gardening and stressed the importance of using soil and not just potting mix. That’s primarily what I was using for all of my plants on my balcony garden. I never knew what kind of soil to use. I was just winging it as I learned on the fly.

That’s when I thought maybe my sweet potatoes need better soil and more space. So, I bought some organic soil, plant food and larger containers to place my sweet potato plants.  When I began digging up the plants to move them, they were tough to uproot because they’d formed some strong roots. When I finally pulled it up I was SHOCKED by what I saw!

There were small sweet potatoes growing underneath!! I literally screamed with excitement.

Then I had the major revelation that I’m sure all of you reading this already know… Sweet potatoes are ROOT vegetables, so they grow UNDER ground!!!! LOL!

How could I NOT know that???

Another friend told me that the way you know it’s time to harvest sweet potatoes is that the leaves begin to turn brown. Who knew???

Here’s the life lesson I got from this…

Just because you don’t see anything happening on the surface, doesn’t mean God is not working in your life behind the scenes to work things out for your good.

All of the time I didn’t see anything happening on the surface of my sweet potato plant there was all kinds of activity happening underneath.

My life has felt so random the last few weeks. I haven’t felt like I’ve been able to advance in the areas that I want to in my life. But my beautiful sweet potatoes taught me that God is at work in my life even when I can’t see it.

So, don’t ever give up because you could be just at the brink of your breakthrough!

That revelation blessed me SO much!!

I hope it does the same for you.